Video Primers: Romanticism and The Gothic 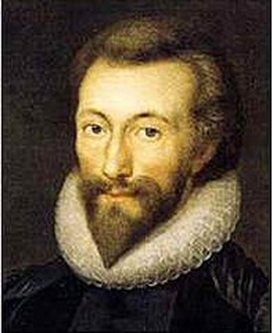 The life of John Donne is filled with contradictions. Born into a Roman Catholic family, he left that faith in his young manhood.  Later, he returned to religion, ending his days as Dean of St. Paul's Cathedral. That position, the presiding official of the cathedral, is one of the highest offices in the Church of England, which had been established by Henry VIII after his break with the Catholic Church.  Donne acquired the reputation as perhaps the greatest preacher of his age.  He was a vivid, dramatic, and spellbinding speaker, and many of his sermons survive as testimony to his enormous popularity. Yet this is the same man who had been a worldly and sophisticated youth in London, a welcome visitor at Elizabeth's court, a soldier and adventurer, and an author of some of the most appreciated love poetry in the language.

Although John Donne lived most of his life during the reigns of Queen Elizabeth I and King James I, his poetry is not like Elizabethan verse. Donne does not always present harmonious images and predicatlbe meters. Rather, he often startles us with his images. therefore, Donne is most often grouped with writers who come slightly later in the 1600s, a group known from the 1700s on as the metaphysical poets. Donne and the other metaphysical poets (such as Herbert, Marvell, and Vaughn) wrote very intellectual verse, speculating about the realms of philosophy. They wrote both love lycics and religious, or meditative, poems in this highly intellectual style, showing off their wit and learning, demanding that readers become immersed in each poem. In fact, in the 1700s and the 1800s literary critics considered Donne's poetry too intellectual, but in the 1900s Donne found favor again. Now critics applaud Donne's style: the conversational tone of his poetry, the rigorous and often witty pursuit of an argument, the sturdy sound of the verse, and the extraordinary imagery drawn from unusual sources. All these elements tend to give Donne's poetry a distinctly modern flavor. John Donne now generally ranks as the finest English poet between William Shakespeare and John Milton." - English and Western Literature, MacMillan Literature Series

Alana Saarinen loves playing golf and the piano, listening to music and hanging out with friends. In those respects, she's like many teenagers around the world. Except she's not, because every cell in Alana's body isn't like mine and yours - Alana is one of a few people in the world who have DNA from three people.

Allow me to wax poetic for a moment.  One of the most tragic parts of the novel to me as a reader is man's inability to recognize real beauty beyond appearance.  How differently the novel would have ended if just one man would have offered acceptance to the monster!  He even tells Victor, "If any being felt emotions of benevolence towards me, I should return them an hundred and an hundred fold; for that one creature's sake, I would make peace with the whole kind!" (Shelley 130).  During the time that the monster observes the cottagers, he states that he "had admired the perfect forms [...] - their grace, their beauty, and delicate complexions," but he becomes "terrified when [he] viewed [himself] in a transparent pool" (Shelley 102).  Recognizing his lack of outer beauty, he tells the blind old man, DeLacey, that he is "full of fears" of being "an outcast in the world forever" (Shelley 119).  No seeing being in the novel stops appreciate the innocent beauty in the monster's hope for inclusion and companionship.  It takes a blind old man for there to even be communication between the monster and another being, and sadly, tragically, once the young family enters the cottage, the monster returns to his role of monster and is outcast from his "home."